Every year we get asked when the best time of season to visit Niseko is.

The answer very much depends on what you want out of your time in the snow. To keep things simple, we’ve divided the season into three parts; early-season (December), mid-season (January and February), and late-season (March and April).

December can be a great time to visit Niseko. It’s quiet on the slopes and relatively easy to get deals on accommodation – until Christmas that is. But the question is: is there any snow yet? 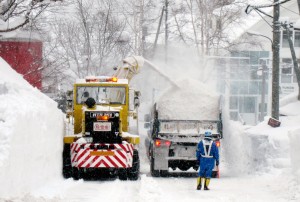 This season has started with a bang and the snow DEFINITELY IS HERE! Last season (2011-2012) was a very similar start, with huge amounts of snow falling from the 2nd December continually for 28 days. The season before however there was very little snow throughout December until a very large storm came through on Boxing Day.

The answer… Yes, it’s worth coming to Niseko in December but keep in mind that the big powder days will be hit and miss and there isn’t enough of a base for the gated backcountry and some off-piste to open yet. That said, if you’re after a fun time on the the trails with a little powder play time when it comes along, December is ideal. 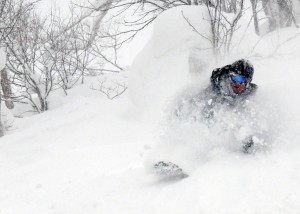 Peak powder season is January and February. It’s cold and snowy, and it rarely goes more than a few days without a fresh snowfall. The dumps are frequently 20-30cms and the temperature stays reasonably consistent (-10 to -15 degrees c), meaning the snow is kept in great shape. But if you’re after sunny days on the slopes, it’s simple; don’t visit Niseko in January.

Now take note… It can get busy at this time of year so you need to book early to secure your accommodation. These days, every fanatical skier and snowboarder around the world is well aware of how good Niseko’s powder conditions are and the morning lift lines can get a little long on a powder day (which is the majority of days), particularly in Hirafu. But it’s still worth the wait if you enjoy the pow as much as we do. Oh we do love that deep powdery goodness!

The time of year to avoid, if at all possible, is Chinese New Year. This is the busiest time of the season in Niseko and it can be very hard to find accommodation. If this is the only time you can visit however, make sure you book everything months in advance, including your lessons with Niseko Academy.

March can be an excellent time of season to visit Niseko, particularly the first half. You still get decent snowfalls but the sun comes out a little more than it does in January and February. Accommodation deals start to pop up, as do special offers on international flights. It starts to get quieter on the slopes again and the lift lines aren’t as frustrating as the preceding months. 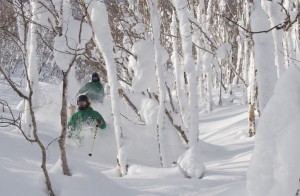 But with the slightly warmer temperatures comes more varied snow conditions. On a powder morning in March the snow can start out nice and dry but by midday it often starts to get heavy. Great if you go hard first thing or are content to spend afternoons cruising the trails or playing in the park, but not ideal if you’re an adventurous, powder hungry shredder with energy to burn.

Having said that however, you can score some amazing snow still. Check out this little powder weekend in March we filmed in 2011…

As April rolls around the powder days become more infrequent but the sun is out to play more often. It’s a great time of year to visit if you’re a family with young children learning to ski or snowboard, as the kids don’t need to bundle up quite as much and they can move around more freely while Grandma looks on from a sunny spot on the balcony.

What ever time of season you choose, you’ll still have an amazing time in Niseko – that’s a given!